All Collections
Working with the Moovly Studio Editor
Advanced Tips
How to use the Move & Transform animation?

How to use the Move & Transform animation?

Written by Geert
Updated over a week ago

In Moovly Studio, you can make an object move to a new position using the Move & Transform animation (formerly known as "Move & Zoom"). And you can do this repeatedly with a sequence of different positions. Move & Transform also allows you to change the object's opacity from point to point.

Move & Transform is a very powerful animation effect, in other programs also known as a "tween" or "tweening". It allows you, for example, to:

While there are so many possible combinations you can define yourself, there are also a number of presets you can start from and modify.

Choose one of the preset options:

In the Timeline, the object will then get a default animation, moving from A to B as shown in the screenshot below:

You can now modify this default animation as follows:

You can add new key points by right-clicking at any point in time in the Move & Transform layer:

A pop up appears informing you that a new key point has been added on the Timeline. You can now move the object to a new desired position, size and rotation in time. It is also easy to remove a key point: just right-click it and select 'Delete'. Or select a key point and hit your Delete or Backspace key! 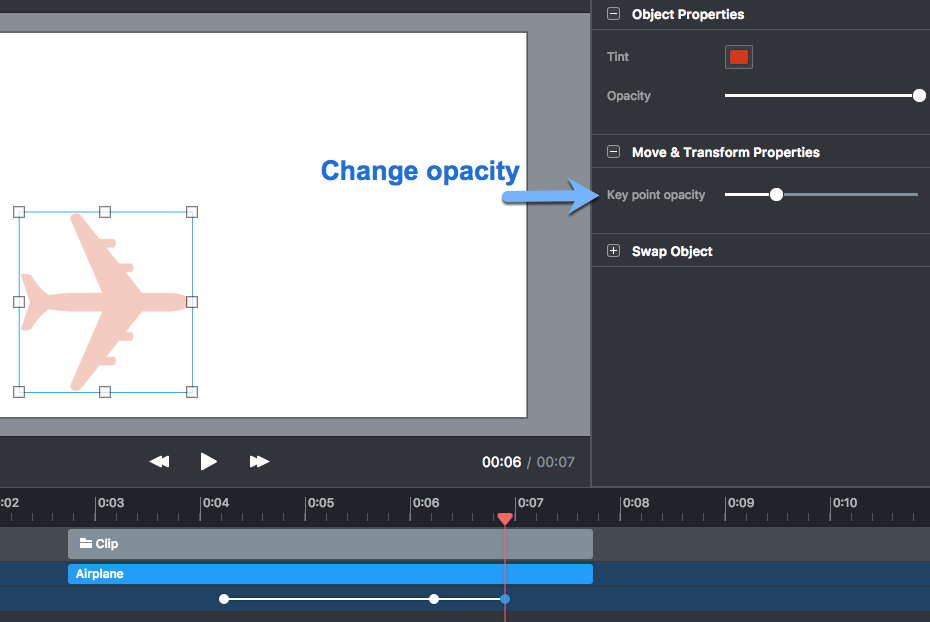 This screen recording shows how to imitate a bounce effect:

Note: in the general Object Properties, there is also an overall opacity level you can apply to the object. This determines the maximum opacity of the object across the whole animation (including all key points).

Did this answer your question?